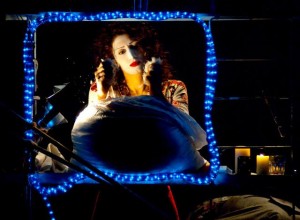 «Do not expect to understand the text or to follow a linear story, warns Russia’s Teatro Di Capua in the programme notes. Which is just as well, because you could wear out valuable brain cells trying to figure this one out. Billed as a tango operita, Maria de Buenos Aires is 90 minutes of relentless activity. At no point are there fewer than three things happening at once. Some of the action is pure, joyful entertainment: the music of superb live band Remolino; the stunning tango dancing; the beautiful voice of street singer Ilona Markarova».

«Some moments, though, such as the remarkable closing image of Maria inside a giant bubble, have their own stand-alone appeal».