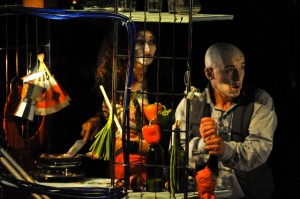 Astor Piazzolla (1991-1992) creatively transformed Tango music in Argentina moving away from the traditional. Piazzolla and Ferrer created this Tango Operita together in 1968. Maria is a personification of Argentinian Tango and the piece is an allegory of ‘the fall of Buenos Aries’ musical soul and its renaissance’.

St Petersburg’s Teatro Di Capua presents this as a surreal dreamlike assault on the sensorium, more of a spectacle than a story, a revelation without resolution. A sequence of tableaux vibrate with restless energy, using every bit of theatre trickery possible. So much is happening on stage at times it is hard to know where to look, or be able to recognise the layered imagery quickly enough. Chagall lovers will recognise allusions and Commedia and Russian clowning abounds.