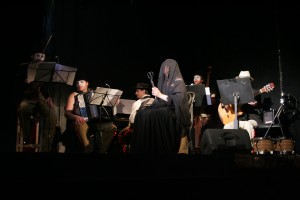 «Consider Maria de Buenos Aires,  operita from 1968 by the Argentine composer Astor Piazzolla. It concerns a young woman so seduced by tango music that she becomes a prostitute, but who is eventually resurrected from spiritual death by giving birth to a new self. The surreal source material has been freely adapted by Teatro Di Capua, based in St. Petersburg».

«The sow is by Piazzolla’s music, played by the four-piece Ensemble Remolino and vocals from Gabriela Bergllo as Maria. Giuliano Di Capua plays the narrator, identified as «the Spirit of Buenos Aires», while the striking, raven-haired Ilona Markarova makes a strong impression as a gypsy-like street singer».

«Forget conventional narrative logic. The real attraction of this multidisciplinary production has more to do with design than plot or performance… This is where Maxim Kuznetzov and Roman Zhdanov’s muscular, clownish stooges, some clever costumes and props, and a setting — a large, mobile platform with a rectangular hole in the middle — that’s continually being reconfigured….»