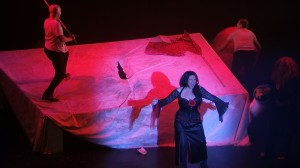 Maria de Buenos Aires is a version of Astor Piazzolla’s 1960s tango operita of the same name – reworked as a mesmeric and visually stunning music-theatre extravaganza. It is directed by Swiss Italian Guiliano di Capua, now resident in St Petersburg, and created in collaboration with Russian ‘theatre of engineering’ maestros Akhe (who previously won a Total Theatre Award for White Cabin). There’s more: the cast includes Argentinian Italian diva Gabriela Bergallo, and there’s a live tango orchestra (the magnificent Remolino Ensemble)  and the ‘perfume designer’ is Nicola Di Capua. Yes, there are things to smell (fresh mint; burnt chocolate) as well as to see, hear, feel, and marvel at. The story is a surreal dreamscape, circling around the eponymous Maria, a Buenos Aires prostitute. Or perhaps we should say ‘Marias’ for there are many: the ‘real’ one, and after her death, the Shadow of Maria – but then also various alter-ego Marias and Maria-ish creatures, including a Maria who is possibly the Mother of God. (Yes, it’s the good old virgin/whore dichotomy!) The Marias encounter all sorts of characters in their journey through life and death – members of the Buenos Aires underworld, in both senses of that word. The story is held together (in as much as a dream can ever be ‘held’) by a ranting poet-narrator cum duende, or carnival devil, a ringmaster who manipulates the characters like puppets. The Akhe touch is obvious: the stage is a glorious mess, filled with surreally-shaped furniture, puppets, fairy lights, tools, and clusters of objects – domestic or otherwise. Heads pop up from holes; large ticker-tape banners are painted live on stage; substances are scattered or poured or sprayed around the stage and mopped up carelessly. The carnival motif threads through the whole piece, which is like one big dark and dangerous Day of the Dead celebration, replete with masks, painted faces, shrines, and coffin-like containers. And all the while the band plays on, Piazzolla’s exquisite music a celestial counterbalance to the hellish confusion all around. It is a pleasure to see such an unashamedly extravagant theatre-of-the-senses on an Edinburgh stage – this sort of exuberant excess has been missing from the Fringe for the past few years, so is very welcome. Theatre that goes straight to the guts – a mad mess, but a glorious success. Viva Maria!